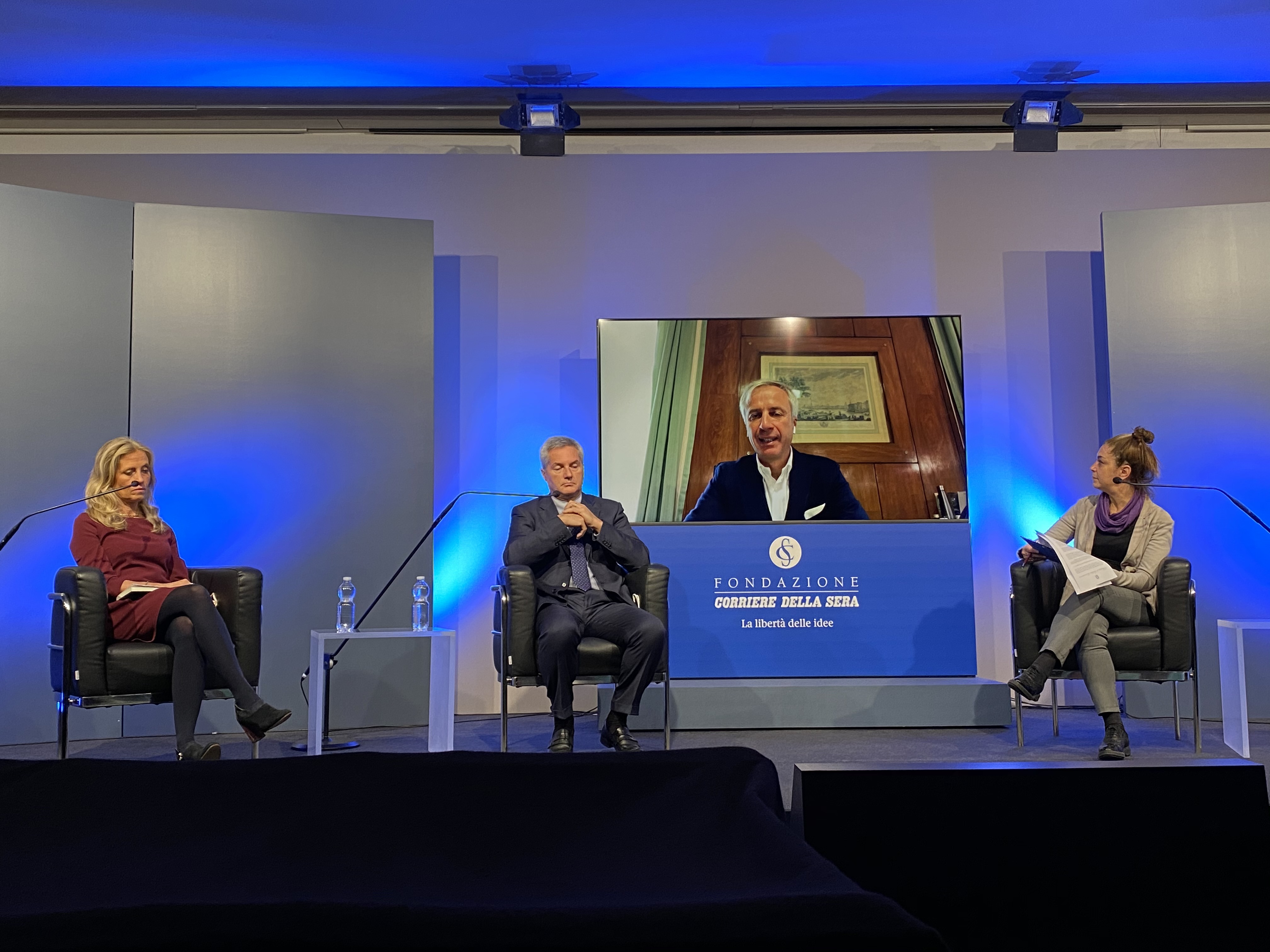 IS REMOTE WORKING A VALUABLE OPPORTUNITY? this is the focus of the online meeting promoted on 22 October by Pesenti Foundation and Corriere della Sera Foundation with the presence of:

“Is Remote Working a Valuable Opportunity?” this is the title of the live streaming meeting broadcasted on the platforms of Corriere della Sera, one of Italy’s oldest newspapers, to reach a larger group of attendees in full compliance with covid-19 protocols.

The panel discussed the potential and the limits of working from home, which was adopted and, in some cases, improvised massively during these recent months due to the pandemic. The speakers questioned, also, the measures to be taken to avoid negative impacts.

“After the covid-19 emergency, remote working will be a new way of living and working or will remain only a brief stint?” demanded Piergaetano Marchetti, President of Corriere Foundation during his opening speech, introducing the crucial theme of the debate and highlighting the fruitful collaboration between Pesenti Foundation and Corriere della Sera Foundation. Discussing topical issues and wondering about the future has always been the red thread of the meetings organized by the two foundations”. “This pandemic represents a discontinuity and an acceleration of phenomena already underway, such as technological acceleration”, underlined Carlo Pesenti, President of Pesenti Foundation. “The effects of remote working on our way of working, our life and the social fabric, can be measured in the medium and long term. Today we have invited speakers from different sectors to explore this relevant issue.” “What are we facing today can be defined as remote working or is it a “forced” working from home? What has really been done in recent months?” asked Valeria Palumbo, Chief Editor of Oggi and moderator, pointing up what the new remote working provisions indicate and warning about possible risks. Working from home is one of the ordinary ways of carrying out work’s performances in the public administration. The worker defined as ‘agile’ alternates days in presence and remotely, in the absence of specific time and workplace constraints, with consequent problems at trade union level and labor rights.”

“Before the pandemic, when working from home was limited to one day a week, we recorded a positive impact on increasing productivity and meeting deadlines influencing positively the job satisfaction – said Paola Profeta, professor of Finance at Bocconi University-. The result is a good balance in social-family life with a consequent reduction in stress. Remote working imposed by this emergency has vice-versa recorded many negative aspects. In the short-term women workers faced the difficulty of managing work activities, household chores and family at the same time, and this has sharpened gender inequality.”

“In the future, with remote working not linked to an emergency, we could witness a paradigm shift that will place at the center work activities’ results and goals, in spite of the time actually spent in the workplace. It will depend on the context and on the measurability of the results in each working sector.” Another issue that deserves attention and that was detected during remote working in an emergency situation is social isolation: “An extraordinary personality can create extraordinary things even if locked up in his room. On the other hand, in a normal personality, the absence of sociability impoverishes one’s mind”, underlined Maurizio Ferraris professor of Theoretical Philosophy at the University of Turin. “Intellectual works are the product of sociality, while spiritual works are born from solitude. “ “It is important to have a city that is balanced in terms of space management and liveability, which takes into account safety and cleanliness problems. – added Aldo Mazzocco CEO of Generali Real Estate-. It is necessary to create the right mix between office working, home working and working in various spaces in the city. Securing neighborhoods, especially suburbs, and rethinking flexible infrastructures are important issues to rethink the cities of the future.” “Remote working can also lead to a change in the local economy. Flexible places and flexible hours can be a stimulus to the territory if they are really smart:  in other words, if they are balanced and flexible in the organization of work” Paola Profeta specified at the end of the meeting.

“A serious concern is that young people are cut off from the process of learning and visibility in new working realities” highlighted Aldo Mazzocco.

To the closing question by Valeria Palumbo “How we can help our communities to embrace a positive change in the city?” Professor Maurizio Ferraris concluded that “We need to create the conditions for citizens to become smart and the key point therefore is education.” The conferences are among the most well-known and appreciated activities of the Pesenti Foundation. Along the years many the “round tables” have seen renowed speakers such as Nobel laureates and world-wide famous scholars, as well as managers, bankers, academics and representatives of the Italian and European political arena.

An important collaboration has been finalized in 2018 with the Corriere della Sera Foundation that sees both the foundations committed to address and attract also younger generations, in addition to their usual target audience.