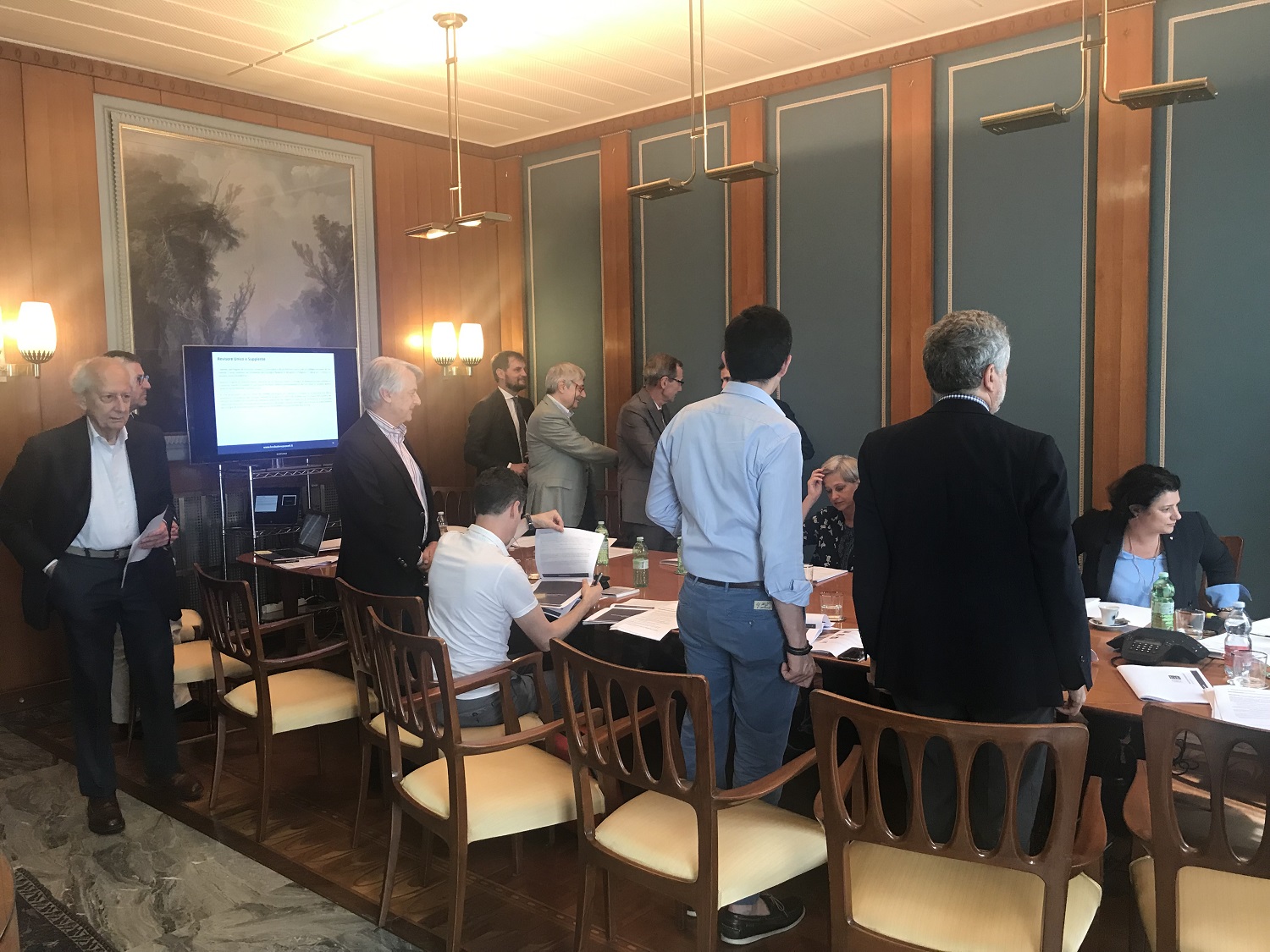 26 July 2019 – The Cav. Lav. Carlo Pesenti Foundation met today in Milan and appointed the new Board of Directors, that will be in office for the next three years.

Carlo Pesenti was confirmed as President. The Board appointed Giulia Pesenti (a sixth-generation member of the Pesenti family) Vice-President. Veronica Squinzi and Giovanna Zucconi, relevant industry and media representatives, particularly committed to aspects of sustainability, became member of the Board of Directors. Their appointment is in accordance with the newly adopted Articles of Association ensuring Board compliance with gender equality criteria.
The Board of Directors confirmed the appointment of Giorgio Barba Navaretti, Ferruccio de Bortoli, Marco Imperadori, Matteo Kalchschmidt and Donato Masciandaro, as representatives from academia, media, and civil society.

While wishing the new board members good luck as they start their term on the board, Carlo Pesenti thanked the outgoing Directors for their very capable work during the past years and expressed his confidence in the new world-renowned Directors’ contribution to the Foundation’s vision and initiatives.

The President also highlighted the Foundation’s growing support for various impact investing projects, especially businesses established by young people. Along with this commitment, come the Foundation’s traditional charity initiatives under the guidance of a newly appointed Charity Committee.

The Board is composed as follows:

Born in Milan on 30th March 1963. Graduated in Mechanical Engineering – Polytechnic School of Milan.  Master’s Degree in Economics & Management – Bocconi University, Milan. Married, father of six children.  Chief Executive Officer and Chief Operating Officer of the Italmobiliare S.p.A.. In addition to his posts in the Italmobiliare Group (including CEO of Italcementi from 2004 until 2016 when the Italcementi investment was sold), he has been a director of leading stock-listed companies.  Read more

Giorgio Barba Navaretti is Professor of Economics at the University of Milan, Scientific Director of the Centro Studi Luca d’Agliano and Distinguished Visiting Faculty at Sciences Po, Paris. He is specialised in international and development economics. He has been working extensively on the economics of multinational firms, on the link between trade, foreign direct investments and technology diffusion, on international economic policy and on firms’ dynamics in developing countries.  Read more

University Professor at Politecnico di Milano, holder of the chair of Design and Technology Innovation at the Faculty of Building Engineering-Architecture. He is Delegate of the Rector of the Politecnico for Far. Researcher, he has published books and articles in trade magazines in Italy and abroad, where he is invited for seminars and conferences on issues of sustainability and energy saving. He represents the Politecnico di Milano in the European research networks Active House Alliance and Android.  Read more

Professor of Economics of Financial Regulation at Bocconi University andSDA Professor. Since January 2017, he is Ettore Bocconi Department of Economics Liaison Officer at SDA Bocconi School of Management. He is Head of Ettore Bocconi Department of Economics since 2013 and President of Baffi Carefin Centre for Applied Research on International Markets, Banking, Finance and Regulation since 2015. He conducted many research, training and consulting projects with some international organizations(International Monetary Fund, World Bank, Inter-American Development Bank, United Nations).   Read more

A member of the sixth generation of the Pesenti family, she is actively involved in a variety of social responsibility projects, in collaboration with local organizations, focused on education (as a tool for women’s empowerment and integration), youth training programs (enhancing the humanistic approach not simply as a field of study, but also as a means to read complexity), and migration flow management. Read more

Mapei Group Global Development Director. After a period in the Controlling Department of Mapei, starting from 1999 she moved to Mapei Strategic Planning Department and she is nowadays Global Development Director. After a period in the Management Control Area of Mapei, since 1999 she joined the Strategic Planning Area and is currently Head of Global Development. He is a member of several Executive Committees including Assolombarda General Committee, the Executive Council of the American Chamber of Commerce, the Superior Council of Bankitalia Milan headquarters, the ISPI (Institute for International Political Studies) Board of Directors. Read more

Entrepreneur and journalist. Author and anchor of television and radio cultural programs (Pickwick, Sumo, Che tempo che fa), she has been creator and editor-in-chief of the Effe magazine launched by “eclectic” publishing house Feltrinelli. She is the Director of “A seminar la buona pianta” Sustainability Festival and the designer of Serra&Fonseca brand. Read more

Secretary General of the Pesenti Foundation, Senior Advisor for Italmobiliare’s Communications and International Affairs. Graduated in Communication Sciences, he is a professional journalist and professor of Communication Strategies at the second-level Master in Media Relations, Cattolica University of Milan. Read more