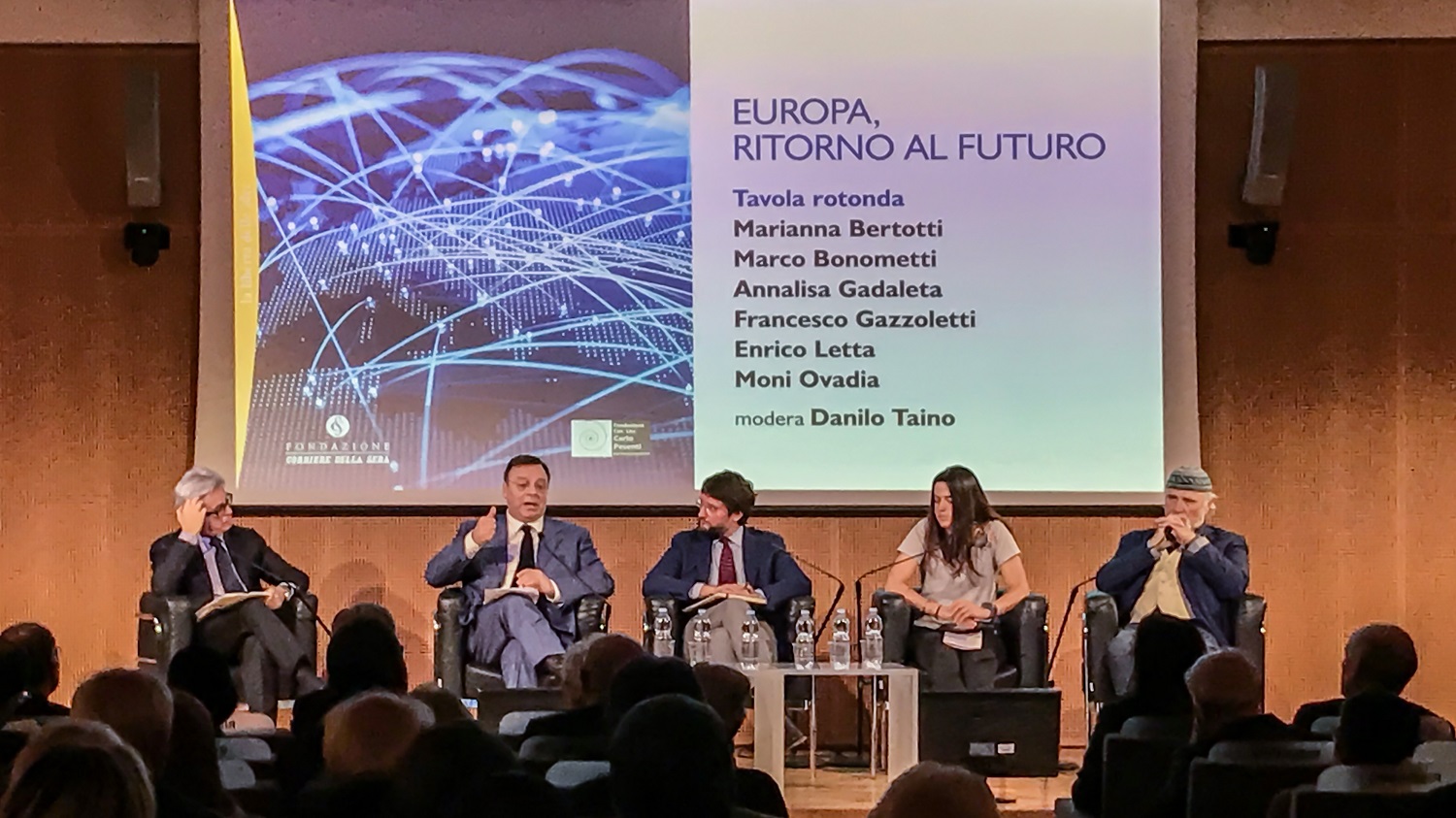 4 May 2019 – The Pesenti Foundation Conference “EUROPE, BACK TO THE FUTURE” was held today at the premises of Corriere della Sera Foundation.

It’s time for a deep reflection on Europe.

The dynamics of the European continent and present value battles (economic and ideological) make the 26 May elections a historic/strategic moment for the future of the EU.

According to Enrico Letta “We cannot give populists the authorship of the word Italy, as if they really were representatives of the people. The Italian sovereigns against the Europeanists.” The former Prime Minister warns of “the elite against the people”. It would be dangerous for the internal/political dynamics and at the same time unable of assessing the value of a Europe “at once ideal and real”. On the contrary, every effort should be made to highlight and defend European achievements and values, yet improving Europe’s strategic response capacity and possibly forging a new path nobody has seen before.

A Europe, which can provide adequate responses to problems, constraints and emergencies, but also promote the development of a real sense of belonging, while reappropriating a big and long-term thought. It must encourage the contribution of Europe’s younger generations through structured cultural exchange programs, which become fundamental in times of rejection of modernity undermining all human activity from science to tolerance, to new market development.

The growing perception of “backwardness” as a protection tool urges the need for Europe’s success to be gained through a “return to the future”, i.e. more inclusive well-being, as well as the construction of a European identity, founded on its shared, essential values. Common commitment must be to face the increasing inequality and deteriorating economic conditions in many EU countries, as well as to tackle the widespread climate of insecurity, especially in marginalized areas, while ensuring more effective and efficient response to cross-border emergencies, such as environmental hazards.

The Pesenti Foundation have addressed these issues as major themes of its conference entitled “Europe, Back to the Future. Between historical values and future prospects”. In keeping with its tradition of providing a forum for analysis and discussion of cutting-edge topics, the Pesenti Foundation has organized a symposium with prominent, yet unconventional, guest speakers to give a talk—beyond any political consideration—on what kind of Europe we want to build for younger generation, entrepreneurs, social workers, people of culture. To shape the future we must understand now Europe’s fears and hopes and design a stronger continent. Because without Europe we will all be more fragile.