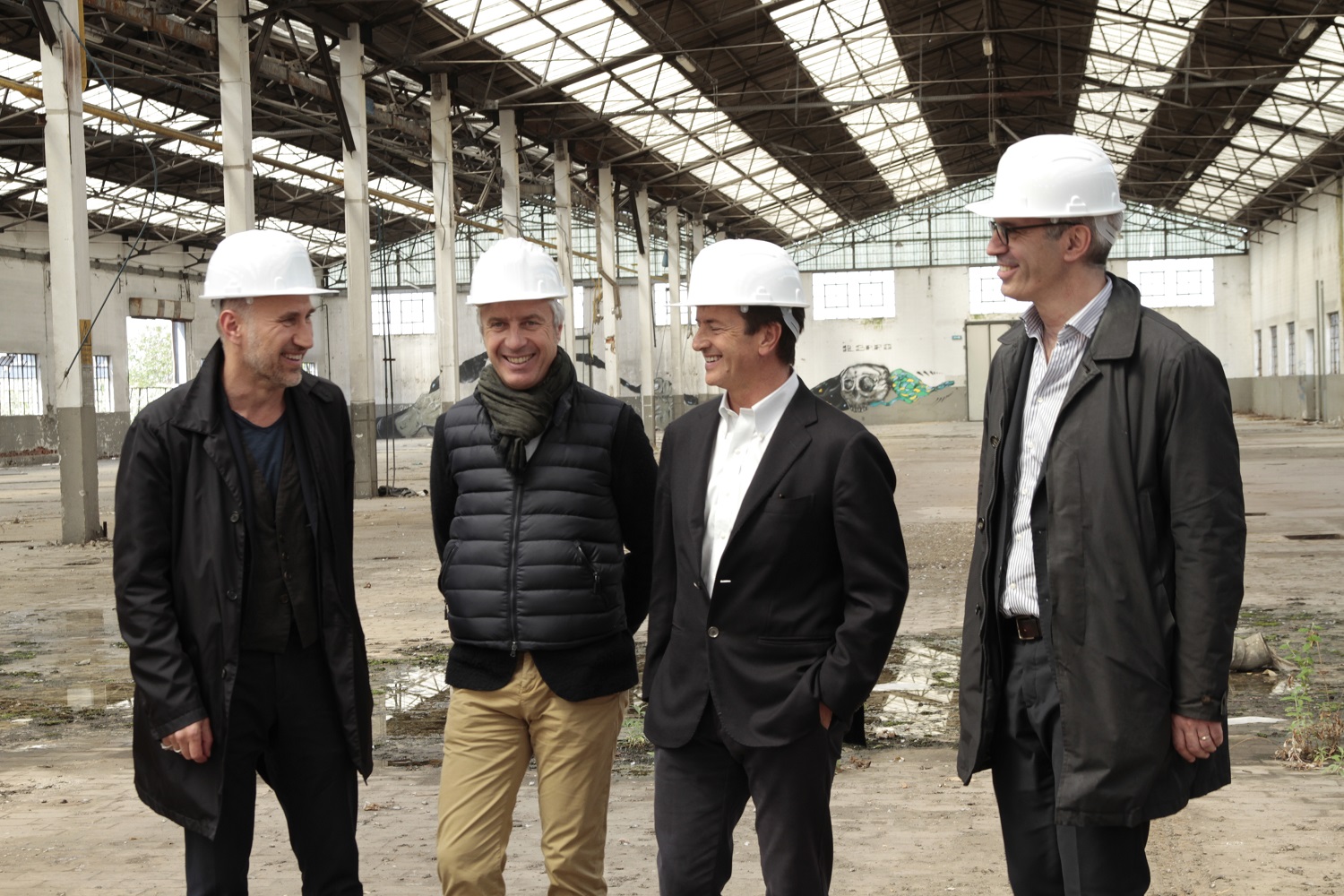 The project has been entrusted to architect Mauro Piantelli, a partner of DE8 Architects practice.

Bergamo, 26 April 2019 – Regeneration of a post-industrial area, that was once home to the Gres Manufacturing Company, through an innovative urban development model for a smart city.

The project was illustrated by the president of the Foundation, Carlo Pesenti, and architect Mauro Piantelli at a meeting attended by Bergamo Mayor Giorgio Gori, and Councilor for Urban Regeneration, Francesco Valesini. Architect Mauro Piantelli, partner of De8 Architects, entrusted by the Pesenti Foundation, started an urban regeneration intervention project of the former industrial area of Gres Company in Via San Bernardino. The project must consist of three main elements:

– architectural quality of the rehabilitation;
– social purpose of most of the renovation works;
– economic balance of the implemented initiatives.

“To achieve these goals,” President Pesenti stressed, “the Foundation will work closely with Bergamo institutions, first the Municipality and the University of Bergamo, in order to develop a master plan that is attractive to sector actors. I’m thinking of student housing management companies, or physical therapy and rehabilitation centers or sports facilities to be integrated into the existing Ice.lab. The project will also offer a variety of specific commercial practices associated with high-tech craftsmanship. I would also like the project to include a place to develop business incubators for youngsters.”
The architectural project will obviously integrate with a detailed business plan to attract the attention of potential investors, but above all to carry out initiatives with social and economic growth potential. Since 2016, the Foundation has been supporting various impact investing projects focusing on social issues in partnership with the Oltre Fund. Impact Investing is an investment approach combining economic sustainability and positive social impact, developing community well-being models associated with a fair distribution of value to all stakeholders.

“We now count on the Oltre Fund to utilize a variety of skills in order to succeed with this challenging project,” added Pesenti. “The underlying concept of the project revolves around the idea of a a ‘social impact’ area: a service-oriented district intended primarily for young people living or gravitating to the city of Bergamo. The work we present today is an intervention designed to improve community well-being, combining economic and social sustainability.” “From the onset of this project,” explained architect Mauro Piantelli from the DE8 Architects practice, “we focused on the recovery and requalification of the dismissed industrial area as a link between past and future, as well as on further development of green spaces. According to a recent statistical portrait, the city of Bergamo, notwithstanding an increasingly well-structured presence of the University in the urban context, is facing a significant youth drain. Throughout these years, much has been done, but we cannot fail to observe that much remains to be done in terms of city attractiveness. Urban planners, architects and landscapers are accustomed to explore the potential of urban spaces: in architectural literature, vibrant and creative socially-livable places are often successful examples of industrial conversion. But they are always re-implementations and upgrades rather than replacements. The sense of space of these abandoned buildings, the relationships between external and internal spaces, the integration of activities, the hybridization of public and private space are the basis of the architectural project.”

“Total area of the project is 61,000 m2,” Piantellli adds, “out of which 20,000 m2 will be destined to collective public spaces and 15,000 m2 to green areas. Some buildings will be demolished while others will be renovated and converted into rehabilitation spaces and offices, Student&Faculty residences, start-up hubs and technological craftsmanship labs (the former Gres factory), covered market& food hall, sports stores and indoor sports facilities to be integrated with the existing Ice.lab.” Bergamo City’s Mayor, Giorgio Gori, stressed the project’s commitment to responding to the city’s social needs: “We return-at the end of this administrative mandate-where we started, in March 2015, with the construction of the new Ice Palace. It was the pilot project of a major urban development plan for the Malpensata, Carnovali and Campagnola districts. The ice.lab sport complex is the key to understanding the Pesenti Foundation’s latest initiative. Sport facility development has been a strong commitment of the city of Bergamo in this years (the Stadium, the former OTE New Arena, the Montelungo CUS, the new Custom Corps Sports Facilities, the Italcementi swimming pools).”

“Along with sport programs,” Mr. Gori added, “the Pesenti Foundation is also engaged in several social action programs in view of the projected demographic developments, which are a fundamental priority of our mandate: we want to make the city a great place to live in for both young and old. It is no coincidence that both special-purpose residences for old population and temporary housing for young people are expected to be developed. Actually at an urban and architectural level, the word “re-use” increasingly refers to a total replacement of the existing, but it is not the case with this project. Its raison d’être is to secure the effective re-use of the existing buildings in the former Gres industrial area, giving them new and offering the city new social services. This is the approach we have strived to promote over the years.”. Current total surface area sqm. 58.570, out of which:
• the former 2009-dismissed factory for total 46,000 sqm. (floor area 18,000 sqm., gross floor area 26,000 sqm.);
• a historic building hosting offices and warehouses, located in the northern portion and consisting of two multi-level blocks with exposed brick façades and regular openings. Nearby are two sheds with vaulted roofing covering old exposed concrete elements of high quality;
• in the southern portion of the area overlooking the ring road are larger and more recent warehouses of no architectural value, along with a big free paved area.
Flanking the northern side of the area is the new Ice Palace complex, fully operational since 2016.