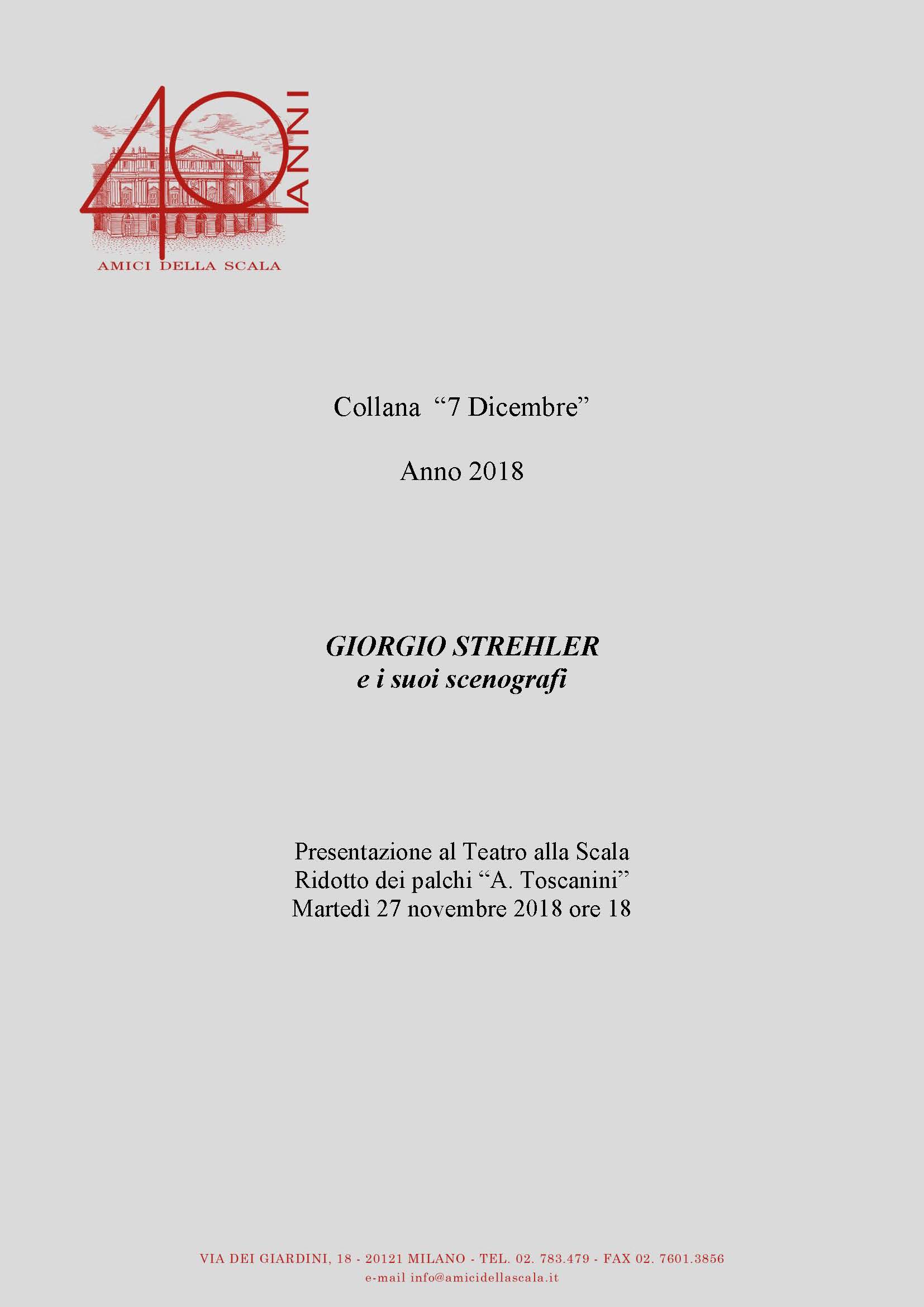 27 November 2018 – As a tribute to the season opening of Teatro alla Scala the Pesenti Foundation has supported the long-standing annual publishing project undertaken by the “Amici della Scala” Association and its Founder and President Anna Crespi.


Amici della Scala (“La Scala’s Friends”), on the opening of La Scala 2018-2019 season, chose to publish the book “GIORGIO STREHLER and his scenographers”.

This large-format book, bilingual edition, with high-quality pictures, traces the director’s career and his theater productions with Teatro alla Scala and Piccolo Teatro in Milan, and various international theaters in Paris, Vienna and Salzburg.

The book’s design is unique, examining his theater production from the perspective of the scenographers who, from time to time, worked with him.

Giorgio Strehler was one of the greatest directors, writers and theorists of the Italian theater. He was born in Barcola, a small village in the province of Trieste, on August 14, 1921.

The environment in which he grew up led to his interest in music making him one of the most emblematic directors of the European theater. While still a boy he moved to Milan with his mother and studied first at the Longone boarding school and then at the Parini high school. Then he went to law school, but his strong passion for theater pushed him to enroll in the Accademia dei Filodrammatici (“Academy of amateur actors”) drama school.

At the outbreak of war, he was enlisted in the Italian army. During the war he took refuge in Switzerland, in the Murren camp. Here, though working with limited resources, he managed to stage, between 1942 and 1945, “Murder in the Cathedral”, “Caligula” and “Little City”. Back in Italy he resolved to devote himself entirely to theater, working as director, actor and critic, and writing for the “Momento Sera” magazine.

In 1947, together with his friend Paolo Grassi, he established the “Piccolo Teatro della Città di Milano”, the first public theater to be built in Italy. The inaugural play was Maksim Gor’kij’s “The Lower Depths”, in which Strehler decided to play the role of the cobbler. Together with the establishment of “Piccolo Teatro”, Strehler also directed his first opera production for Teatro alla Scala of Milan. The opera was Giuseppe Verdi’s Traviata and had a resounding success.

Thereafter, the director devoted himself principally to staging major works belonging to the world artistic culture, like Shakespeare, Carlo Goldoni, Luigi Pirandello, Anton Chekhov, Bertolt Brecht and Eduardo De Filippo. In 1968 he founded a theater group called “The Action Theater” and staged some plays, but then returned to work exclusively for the “Piccolo Teatro”.

Besides his theater activities, Strehler got involved in politics as a Senator of the Italian Republic and a Socialist Member of the European Parliament. The director, actor and critic died on December 25, 1997, in Lugano, leaving a great artistic and cultural legacy to the world.

The Amici della Scala Association contributes to the theater’s heritage preservation through restoration works and the publication of precious monographic books, thanks to the support of great personalities in the field of art and culture. The Association also participated in the formation of the La Scala Philharmonic Orchestra. In its forty years activity, the Association has published 119 books on the history of music and theater: a vast collection, a rich resource for scholars and researchers from all over the world.