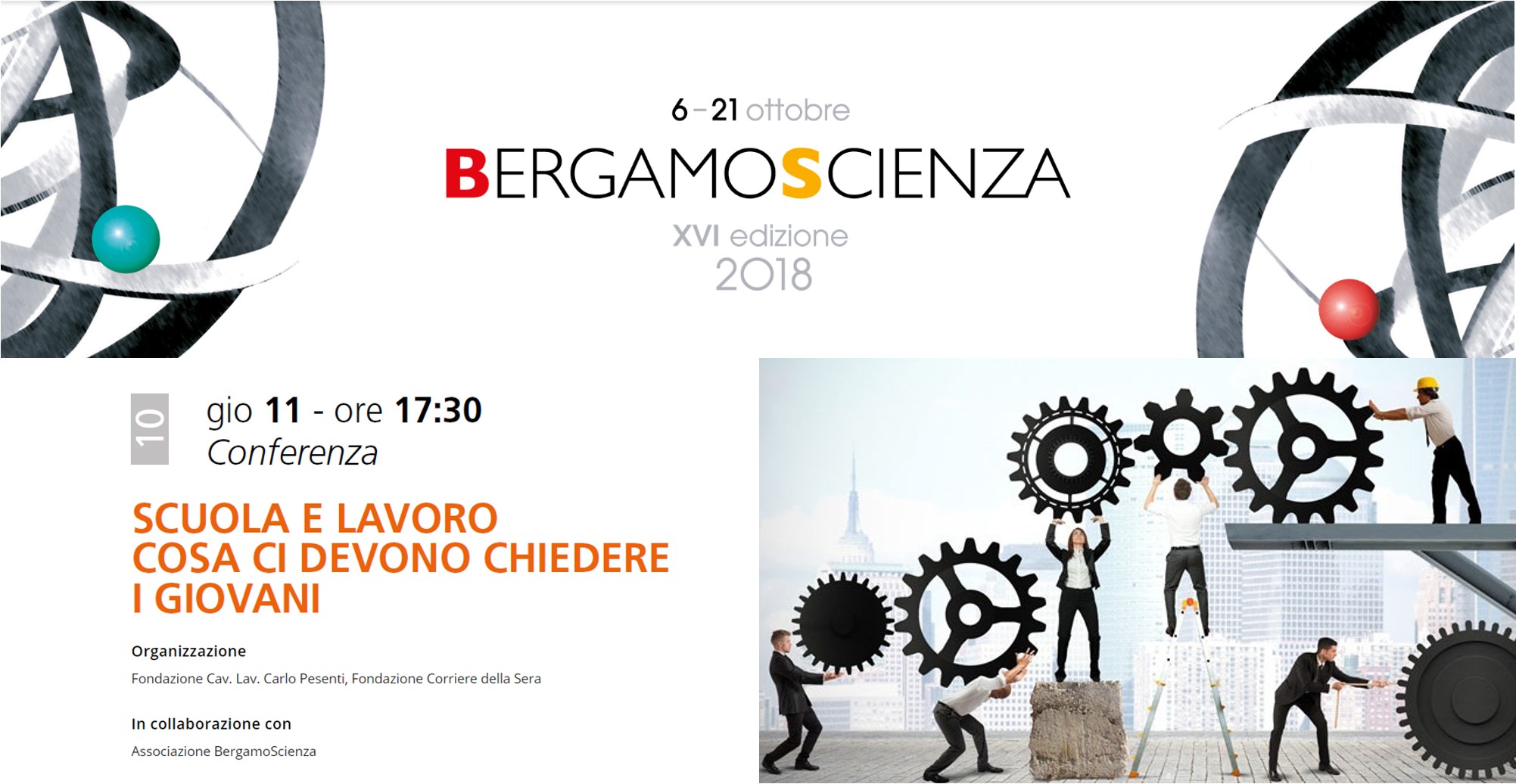 October 22, 2018 – This year again the Pesenti Foundation supported BergamoScienza, the 16-day science festival (6-21 October 2018) exploring the wonders of science from a multidisciplinary perspective: from medicine to physics, from artificial intelligence to biology, from technology to chemistry, from mathematics to astrophysics, with interesting contributions also from the world of arts and entertainment.

The main purpose of the festival is to make science more accessible to general public, especially youngsters and students, improving and enhancing their technical-scientific knowledge and widening their interests.

The Festival program also includes a conference organized by the Pesenti Foundation with Vittorio Colao and Dario Di Vico on the theme “School and work. What young people should ask us”.

Over the past 10 years, Vittorio Colao has traveled more than 1,250,000 miles on airplanes and 50,000 kilometers by bicycle, driving the transformation of Vodafone from a telephone company to a group ranging from media to communication, and maturing the awareness of the need for improved connections among schools, universities, and companies of all sizes. “There is an acceleration, a change in velocity, but there are also changes in direction. We live in a context of constant change in technology, community and politics. It is an interesting time requiring less specialization and more humanity.” Where is Italy in this journey? What should youngsters ask corporate and institutional leaders for? These will be the opening questions of the interview of Vittorio Colao conducted by journalist Dario Di Vico, marking the first event in Bergamo of the new collaboration between the Pesenti Foundation and the Corriere della Sera Foundation. The 16th edition of the BergamoScienza Festival attracted 133,689 participants, featuring 176 events (49 conferences, 110 exhibitions and workshops, 17 shows). The BergamoScienza Festival was born in 2003 from the strong motivation of a group of friends aiming at communicating science to the general public. The Festival involves the whole town and its province with a number of initiatives exploring the most diverse areas of science and technology. The formula of the Festival is based on three main components:

For the first two weeks of October, the city of Bergamo and its surroundings become the stage of an event of international resonance featuring conferences, exhibitions, workshops, shows and much else: a blend of constructive contamination strengthening the relationship between scientific culture and civic awareness.

The Festival is a story of discoveries, encounters, exchanges and emotion that in fourteen years has involved more than 1,300,000 participants.

Since 2005, when the Association was founded, many major organizations has joined the project as Founding Members: the University of Bergamo, the Vita and Salute San Raffaele University of Milan, the Bergamo Chamber of Commerce, Industry, Crafts, Agriculture, the Bergamo Industrial Association and UBI Banca.
The Festival is also supported by institutions, foundations and private companies from all over the territory granting free access to all events.