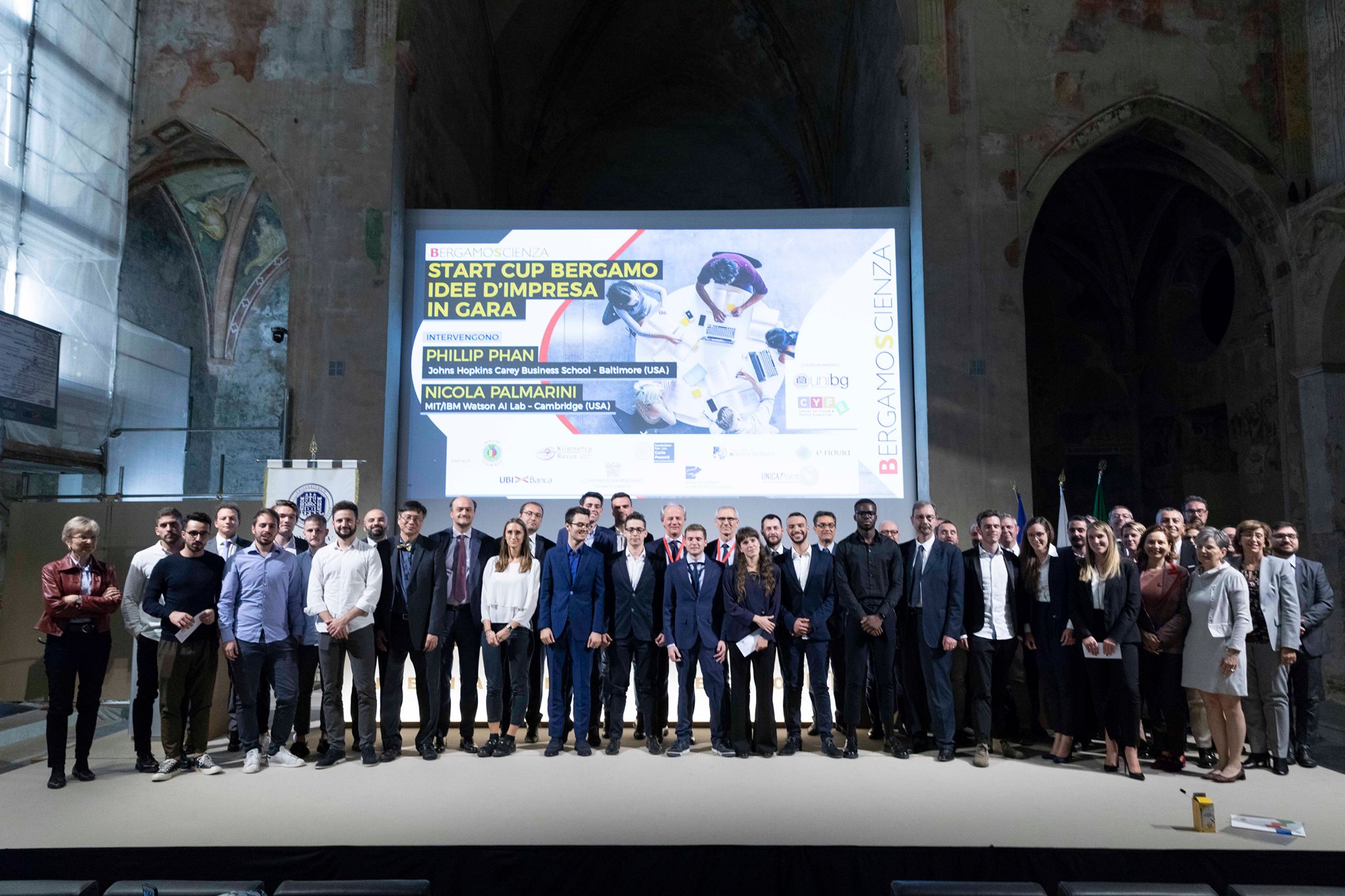 The winner of Start Cup Bergamo 2018 is “Fire Bird Brigade”: a remote-controlled aircraft fire fighting system. The Pesenti Foundation awarded “A Photocatalytic Foam” by Cristian Prometti as project with the highest social impact. Bergamo, 16 October 2018 – During the 16th edition of the BergamoScienza Festival, in the Auditorium of the Bergamo University, it took place the final event of “Start Cup Bergamo 2018” training and entrepreneurial support program, now in its ninth edition.

From this year the Pesenti Foundation will sustain the Start Cup Bergamo program, strengthening its collaboration with the Bergamo University and supporting the best proposals in terms of “impact investing”, namely projects having positive impact on local social dynamics, and in particular projects developed by the Bergamo 2.035 research project, a long-standing collaborative partnership between the Pesenti Foundation, the Bergamo University and the Harvard University – Graduate School of Design.

The Jury decreed the 2018 winners as follows: Second place (€5,000): Photocatalytic Foam by Cristian Prometti. A n innovative solution for the removal of micropollutants in wastewater. The final ceremony also included honoring (€2,500 each) some projects (selected from among all the 13 eligible entries) more in line with the three research issues of Start Cup Bergamo 2018: advanced manufacturing, health and personal care, creative and cultural industry.

Special prize”HC.Lab” in the “Health and Personal Care” category to White and Seeds by Alessandro Ghizzardi, an innovative food company producing healthy and tasty snacks. Special prize in the “advanced manufacture” category to Luca Paganelli with the Pasko project. The winning team will travel to Beijing for a study period at X-lab, a platform developed by Tsinghua University, ranked as one of the best engineering and computer science schools in the world, with which the Bergamo University has recently engaged in a collaboration relationship. Special prize in the “creative and cultural industry” category to Samir Legdah with Blunì, an innovative student faculty document sharing application. In addition to the main award categories, Special Recognition Awards were also made to further enhance the development opportunities of the Start Cup Bergamo 2018 projects. The Young Entrepreneurs Group of Confindustria Bergamo awarded the Multiglasses project by Paolo Ralli with a two-year membership fee and one-year tutoring program as the best business idea ready to take the market; Bergamo Sviluppo – a Special Company of the Bergamo Chamber of Commerce – awarded Esterga by Luciano Fedeli with a special discount on its services; Fondazione Pesenti awarded Photocatalytic Foam by Cristian Prometti with a special contribution of € 2,500 as project with the highest social impact. The Start Cup Bergamo 2018 initiative, which involved in its final stage 13 teams of aspiring entrepreneurs, most of whom under 30, aimed at highlighting the best business projects promoting the economic and cultural growth of the whole society.
Projects were examined in two sessions: in the first one, behind closed doors, the Jury members evaluated the competing projects and shortlisted 6 candidates for the next phase; in the second session, the finalists had a 3-minute “elevator pitch” presentation to showcase their entrepreneurial projects in front of a Jury composed of academics, entrepreneurs, investors, and the community of BergamoScienza.