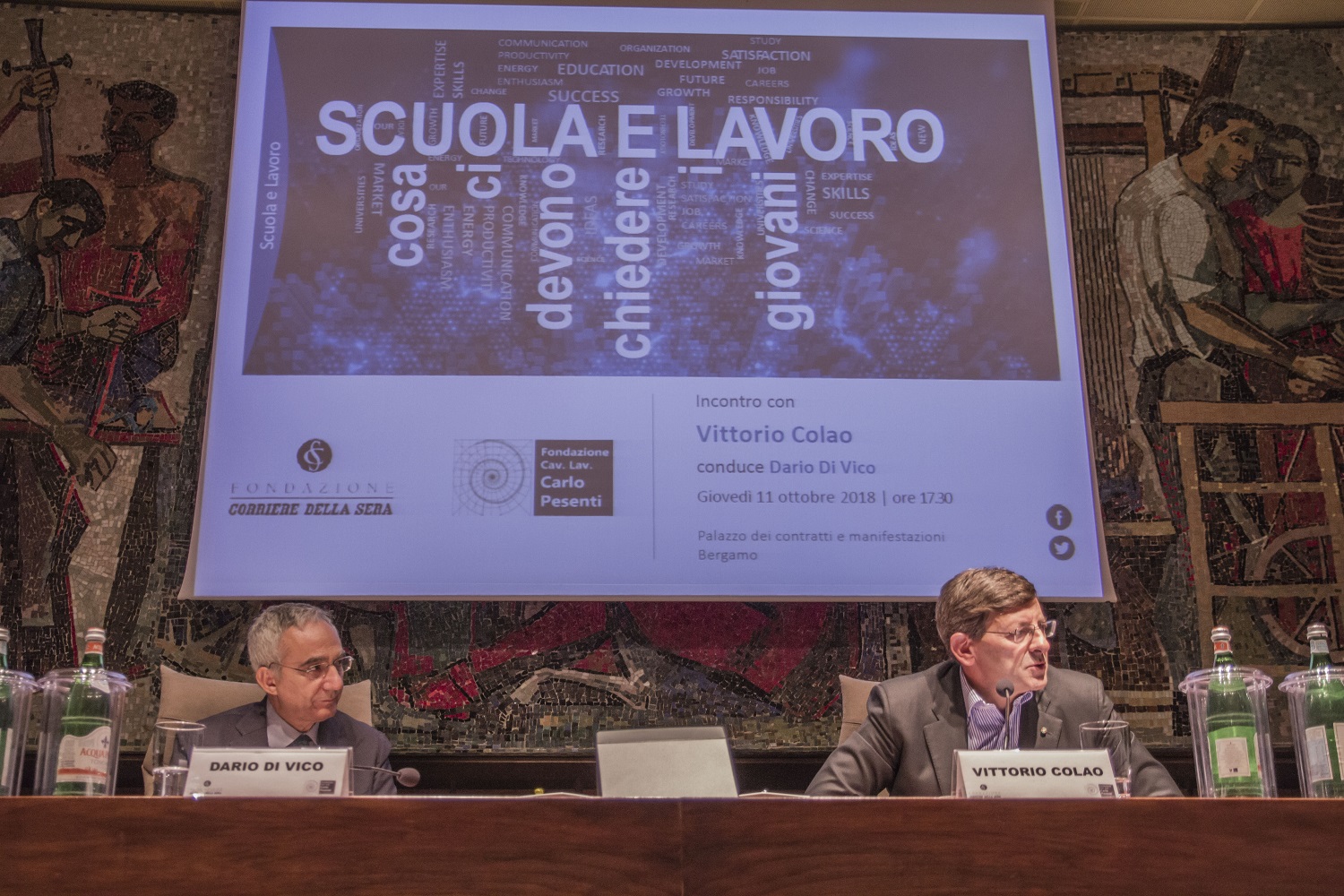 Thursday 11 October 2018 – In the setting of the “Palazzo dei Contratti e Manifestazioni” in Bergamo, a meeting was held today with Vittorio Colao and Dario Di Vico on the theme ” School and work what young people should ask us.”

School and Work: a dialectical link between education and experience, an organic link between theoretical knowledge and professional practice, a complex but feasible combination. It is from this reflection that Dario Di Vico’s interview with Vittorio Colao started, also marking the first event of the partnership between the Pesenti Foundation and the Corriere della Sera Foundation to take place in Bergamo.

This partnership aims at developing initiatives and meetings on topical issues, consistently with the renewed mission of the Pesenti Foundation, focused on innovation and the endorsement of cultural activities with a strong social impact to inspire and educate new generations of entrepreneurs.

An effective partnership between companies and the education system is a strategic issue to offer new generations essential knowledge and guidance for their professional future. There is a social responsibility to develop new integrated educational programs linking school and work on a structural level to create real economic and employment opportunities in the competitive global context. Similarly, there is a social responsibility to attach utmost and constant importance to the role of culture also in technical knowledge, as an element of social cohesion, a tool for growth and an important dimension of citizens, in the conviction that the investment in youth is the most profitable investment in the long term.

“Where is Italy in this journey? What should youngsters ask corporate and institutional leaders for? These were the opening questions of the interview of Vittorio Colao conducted by journalist Dario Di Vico, marking the first event in Bergamo of the new collaboration between the Pesenti Foundation and the Corriere della Sera Foundation. Over the past 10 years, Vittorio Colao has traveled more than 1,250,000 miles on airplanes and 50,000 kilometers by bicycle, driving the transformation of Vodafone from a telephone company to a group ranging from media to communication, and maturing the awareness of the need for improved connections among schools, universities, and companies of all sizes. “There is an acceleration, a change in velocity, but there are also changes in direction. We live in a context of constant change in technology, community and politics. It is an interesting time requiring less specialization and more humanity.””

After graduation from Bocconi University and master’s degree in Business Administration from Harvard University, he began his career at Morgan Stanley in London and later at McKinsey & Company in Milan. In 1996 he became Director-General of Omnitel Pronto Italia and in 1999, after Vodafone’s takeover of Omnitel, he was made CEO of the Italian division. In 2001 he was nominated CEO of Vodafone’s Southern European countries and in the following year he joined Vodafone’s Board of Directors. His responsibilities were also expanded to include the Middle East and Africa in 2003. In 2004 he he left Vodafone for Italian publishing company RCS MediaGroup, where he became CEO. In 2006 he rejoined Vodafone Chief Executive Officer, Europe and Deputy Group CEO, and subsequently was appointed Chief Executive of Vodafone Group.