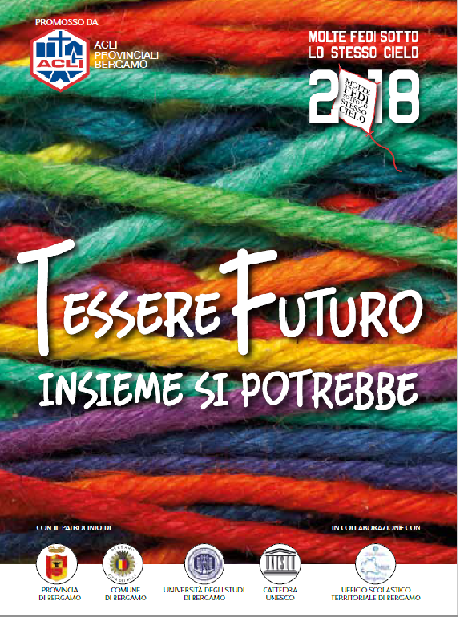 The Pesenti Foundation is among the supporters of Many Faiths Under the Same Sky, “Weaving the Future. Together We Could”, edition 2018.

ACLI Bergamo has been organizing a cultural initiative called “Many Faiths Under the Same Sky” for the past eleven years. Such initiative consists in a series of meetings focused on the themes of interreligious and intercultural dialogue and exchange.

The cycle of meetings is organized under the patronage of the UNESCO Chair in Religious Pluralism, the University of Bergamo, the Province and the Municipality of Bergamo, in collaboration with the Regional Education Office and many other local groups and associations. A jar of earth contains the world’s ingredients.
A seed contains all the forests.
A glass of water irrigates them.
Minimal actions embrace the future immediately.
(Erri De Luca)

“The goal of the initiative is to learn an alphabet of cultures and religions offering the tools to meet responsibly and with discernment the epochal challenge of a plural world in the not–too–distant future. It is our conviction that to live, rather than be subject to, the transformations at work, we are called upon to acquire a better knowledge not only of the Christian religion, but also of other religions, not indulging in any sloppy, if all too common, prejudice, but patiently promoting intercultural and interreligious dialogue and exchange.”

Through the “Many Faiths Under the Same Sky” program ACLI aims to create opportunities for reflection focused on the epochal changes of our time, offering the Bergamo area an outstanding cultural proposal articulated through a plurality of languages. From speech to theater, to music and art, promoting educational programs for active citizenship among young people in particular, and outlining a community project shared and pursued by other local partners.

The eleventh edition of Many Faith will have as its title “Weaving the Future. Together We Could” and will feature high-profile international speakers. WHY WEAVING? WHY FUTURE? WHY TOGETHER?

Descriptions of our present insist on a frayed social fabric, lack of participation, fragile community networks, and current liquid modernity that can be seen as threatening social cohesion and community. The roots of insecurity are marked by the substitution of human solidarity with unlimited competition, by the tendency to entrust single individuals with too much power and responsibility in the resolution of social relevant problems, by a media debate dominated by a resentment towards others, suspected of being responsible for the current crisis. It is not difficult to find traces of all this.

Over the years, the event has become an expected occurrence with a strong attendance also enhanced by national and international keynote speakers from culture, economics, and politics.

TALKING ABOUT THE FUTURE THE WORD “GOD” IN THE SUBURBS

IN THE THREE MAJOR MONOTHEISTIC RELIGIONS

VOICES AND FACES OF HISTORY

THE MIDDLE EAST: THE MIDLANDS.

YOU GOTTA KNOW TO UNDERSTAND EVERYONE’S WATER. WATER FOR EVERYONE

A PATH FOR YOUNG PEOPLE

THE LATEST BOOK OF THE CIRCLES OF R-ESISTANCE