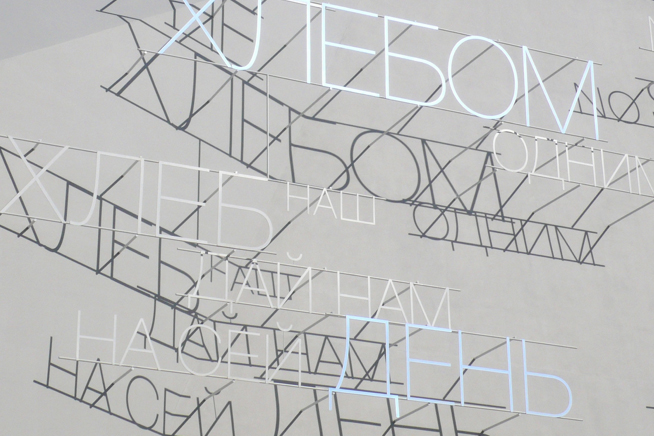 A new location for the writings coming from the Holy See Pavilion at EXPO Milano 2015.

January 9, Trezzano sul Naviglio (MI) – The Pesenti Foundation supports “The Journey of the Word” project for the relocation of the 25 quotes written in 13 languages at the heart of the message the Holy See wished to send out during its participation at Expo Milano 2015. «“Placed on the Pavilion’s facades hanging from supporting walls, the threadlike clear metal inscriptions seemed to float in the air with their projected shadows, evoking, like iconic signs, the biblical episode of the manna falling from the sky.” Ginette Caron, designer and curator of the Pavilion’s graphic layout, illustrated the project–together with Quattroassociati Architects, also authors of Trezzano’s S.M. Beretta Molla church–during an event at the Sant’Ambrogio church in Trezzano. “We thought that this message could be spread out beyond the Expo. So, the dismantling of the Pavilion led to the desire to preserve and revive these words with an ideal trip around the world.”

The project was also supported by the team of prof. Marco Imperadori, Polytechnic of Milan, and Alessio Pesenti from the Brescia-based company Nord Zinc that provided a treatment making the metal letters fully resistant to external atmospheric agents, thus prolonging their duration over time and perpetuating their message.

“The Journey of the Word” began after the dismantling of the pavilions of the Universal Exhibition and covered several evocative places: the first pilot relocation took place on February 5, 2017 in Paderno Franciacorta (BS) where the English writing “Not by bread alone” was placed in the San Luigi parish courtyard.

The second stage (which inaugurated the overall project) took place in Milan on the occasion of Pope Francis’s visit to the city, on March 25: three writings in Italian (“Dacci oggi il nostro pane”), in English (“Give us today our bread”) and in Portuguese (“Dá-nos hoje nosso pão”) were hung on the walls of the apse of the Pentecost Parish in Milan’s neighborhood of Quarto Oggiaro. The church was designed by Italian-Slovenian architect Boris Podrecca and consecrated by Cardinal Angelo Scola, then Archbishop of Milan, on the feast of Pentecost celebrating the universality of the Christian message beyond linguistic barriers. On Sunday 18 June 2017, the ancient Hebrew writing “Not by bread alone” was placed on the walls of the Holocaust Memorial, dedicated to the Children of Villa Emma at Nonantola (Modena), the 73 young Jewish refugees saved from racial persecution during the Second World War.

The writings “Give us today our bread” in Chinese, ancient Greek and Arabic were relocated on July 6 at the Favara Farm Cultural Park, a project of urban regeneration that, through art, has revitalized the historic district of “The seven courtyards”.

Abroad, the “Journey of the Word” has already reached the Mission of the Oblate Fathers in Guinea-Bissau with the inscription “Not by bread alone” in Portuguese.