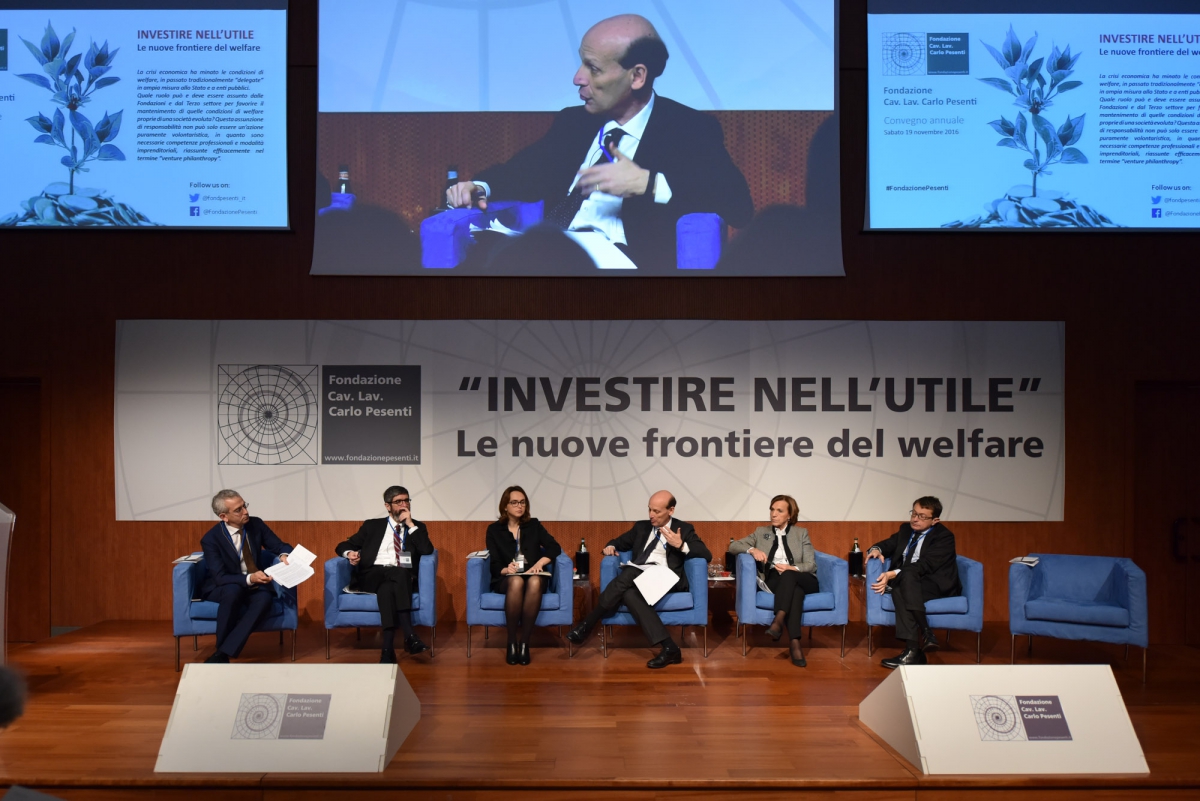 The economic crisis has undermined the welfare system, traditionally operated mainly by government and public agencies. The development of more effective and efficient models is the challenge of venture philanthropy, engaging a new generation of private foundations and third sector organizations.

Many foundations are changing their operating models focusing on entrepreneurship, innovation and professional skills providing economically viable and socially responsible tools and solutions.

Bergamo 19 November 2016 – The Pesenti Foundation annual conference 2016 was held in Bergamo today under the title “Investing in Profit. The new frontiers of welfare”.

Are Italians “Good People?”. The conference opened with an inspirational provocation by Nando Pagnoncelli, followed by the reflections of key representatives of institutional, academic and social/civil organizations focused on long-term innovation and sustainability.

“Addressing the complexities of a new welfare system is not only important but urgent,” said Carlo Pesenti, president of the Pesenti Foundation and CEO of the holding company Italmobiliare Spa, “since what is first and foremost indispensable is a shared awareness of the challenges our society faces today.”

“Upon this idea and upon the need to develop new cultural and financial instruments, we have built the mission of our Foundation, which aims to promote and enhance a culture of innovation as a driver of ideas, projects and activities to make a positive social impact.”

A new model of welfare

“A new model of welfare that inevitably has to face tight budget constraints,” recalled Elsa Fornero, Ordinary Professor of Economics at the University of Turin and former Minister of Labor and Social Policies.

“It is necessary to highlight the budget constraints that have caused stricter welfare policies. The public pension system is a contract between generations that often ends up being unfair to the younger.

New tools are therefore required to safeguard and protect individual’s primary rights and ensure that they are both economically viable and socially sustainable. Reforms must be valued as an investment opportunity. They may be a sacrifice in the short term, but they will bring greater gains in the long term.”

The Pesenti Foundation meeting 2016, which intended to lay out and describe a path to Venture Philanthropy, was divided into two panels, starting from an economic/institutional analysis of the current welfare system and the vulnerability that resulted from the crisis and continuing with a debate on the opportunities to optimize resources with the right mix of professional and managerial skills from a social responsibility perspective.

The two sessions of the conference were moderated by journalists Federico Fubini and Annalisa Bruchi, while comedy actor Enrico Bertolino colored the story of the new philanthropy in a different way, light but strong and explicit at the same time, highlighting the need for a new approach that combines the energy and enthusiasm of non-profits and the managerial skills of for-profits. Press release (Italian version) Economic/institutional analysis of the current welfare system and the vulnerability that resulted from the crisis.

ELSA FORNERO, Professor of Economics, University of Turin, and former Minister of Labor and Social Policy

LIA QUARTAPELLE, Member of the Foreign Affairs Committee, rapporteur at the Chamber of Deputies on the reform for development cooperation

Closing of the first panel

An unusual “story”, a link between the two panels, focusing the audience’s on the need of continuous innovation and forward looking proposals, narrated in a different and easier way.

A debate on the opportunities to optimize resources with the right mix of professional and managerial skills from a social responsibility perspective.

EMILIO CIARLO, Head of Institutional Relations of the Italian Agency for Development Cooperation