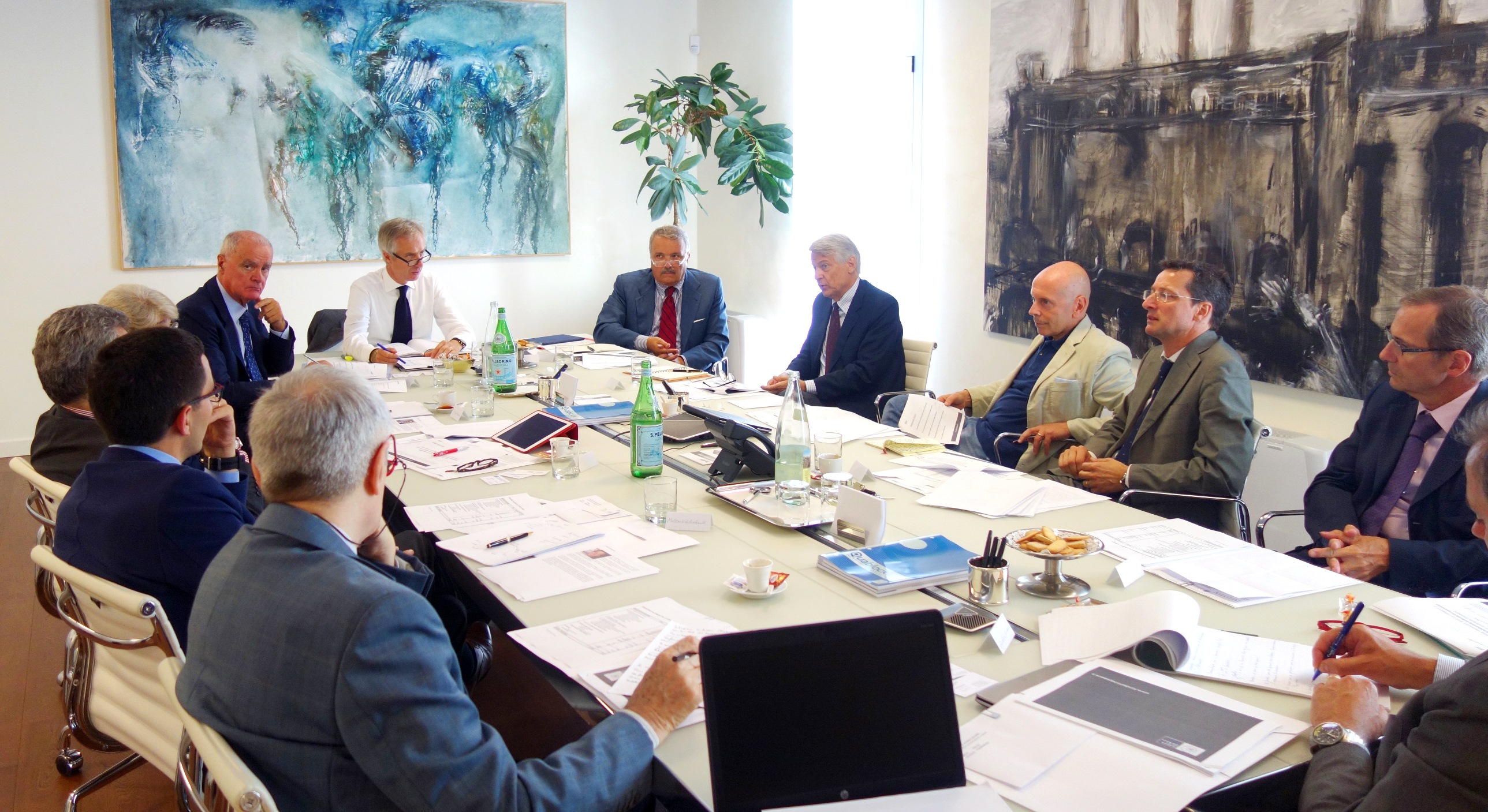 New Board appointed. Giampiero Pesenti Honorary President. Carlo Pesenti President. The Board includes, together with family members, prominent representatives of civil society and academia with a strong international reputation.

26 July 2016 – The Cav. Lav. Carlo Pesenti Foundation, which is wholly owned by Italmobiliare Spa, met today in Bergamo and appointed the new Board of Directors that will be in office for the next three years. Carlo Pesenti was appointed President and Giampiero Pesenti Honorary Chairman.

The Pesenti Foundation aims at promoting and enhancing a culture of innovation as a driver of ideas, projects and activities to make a positive social, environmental and cultural impact. The Foundation develops modern interactions between public sector and for-profit/non-profit private sector, providing sustainable solutions to major social challenges. The Foundation’s new areas of focus – alongside its traditional attention to the conservation of the national historic and artistic heritage, scientific-educational programs, conferences and publications, humanitarian projects and social solidarity – aim at endorsing and supporting the development of new socially-relevant enterprises, especially businesses established by young people.

The new Board of Directors

The Board of Directors appointed Mr. Carlo Pesenti, CEO and Managing Director of Italmobiliare S.p.A., as new Chairman of the Board. Mr. Pesenti succeeds Giovanni Giavazzi who has served as chairman since 2004. “On behalf of the new Board of Directors, I would like to thank Mr Giovanni Giavazzi, who guided our Foundation since its establishment and helped it grow to become a major contributor to economic and social development. During the first 12 years of our recent history,” emphasized Carlo Pesenti, “Mr Giavazzi has properly interpreted the spirit and intent of our cultural, educational and charitable projects at a regional and/or global level.

Among the most significant projects are: partnerships with Italian and foreign universities, in particular the Bergamo 2.035 project developed with UNIBG and Harvard Graduate School of Design; continued support for scientific research; the humanitarian aid in Sri Lanka after the tragic 2004 tsunami, the patronage of the Palma il Vecchio exhibition during EXPO 2015, the international conferences on economic and social studies and the collaboration with the BergamoScienza Association.

We hope that this year-long commitment will be the basis for further future developments. The Foundation’s mission today is to be a real community resource operating with an international perspective and providing an entrepreneurial approach to social and economic actions.”

The Board also thanked Director Dario Massi for his work and Director Italo Lucchini, a member of the Board since the establishment of the Foundation, for accepting the renewed appointment.

In line with its values the Foundation announced a new Board of Directors, composed of high-profile experienced individuals. The Board includes dedicated family members, who have always taken an active part in the social life of the city of Bergamo, and prominent representatives from civil society and academic institutions with a strong international focus.

The Board appointed Giampiero Pesenti Honorary President of the Foundation and Sergio Crippa Secretary General, who will be in charge of the daily operation and management of the organization.

While congratulating the newly appointed directors, Mr. Carlo Pesenti expressed his appreciation for their commitment and their contribution to the to the fulfilment of the vision and the objectives of the Foundation.

Born in Milan, on 5th May 1931. Degree in Mechanical Engineering – Polytechnic School of Milan, Honorary degree in Engineering Management – University of Bergamo. Honorary Chairman of Italmobiliare Spa. Honorary Chairman of the Pesenti Foundation. In 1958 he started working for Italcementi where he was first Chief Operating Officer and then Chief Executive Officer and Chairman until the control of the company was transferred in 2016. In 1984 he became Chairman and Chief Executive Officer of Italmobiliare (Chairman 2014- 2016). Read more

Carlo Pesenti
Born in Milan on 30th March 1963. Graduated in Mechanical Engineering – Polytechnic School of Milan.  Master’s Degree in Economics & Management – Bocconi University, Milan. Married, father of six children.  Chief Executive Officer and Chief Operating Officer of the Italmobiliare S.p.A.. In addition to his posts in the Italmobiliare Group (including CEO of Italcementi from 2004 until 2016 when the Italcementi investment was sold), he has been a director of leading stock-listed companies. Read more

Giorgio Barba Navaretti is Professor of Economics at the University of Milan, Scientific Director of the Centro Studi Luca d’Agliano and Distinguished Visiting Faculty at Sciences Po, Paris. He is specialised in international and development economics. He has been working extensively on the economics of multinational firms, on the link between trade, foreign direct investments and technology diffusion, on international economic policy and on firms’ dynamics in developing countries. Read more

University Professor at Politecnico di Milano, holder of the chair of Design and Technology Innovation at the Faculty of Building Engineering-Architecture. He is Delegate of the Rector of the Politecnico for Far. Researcher, he has published books and articles in trade magazines in Italy and abroad, where he is invited for seminars and conferences on issues of sustainability and energy saving. He represents the Politecnico di Milano in the European research networks Active House Alliance and Android. Read more

Professor of Economics of Financial Regulation at Bocconi University andSDA Professor. Since January 2017, he is Ettore Bocconi Department of Economics Liaison Officer at SDA Bocconi School of Management. He is Head of Ettore Bocconi Department of Economics since 2013 and President of Baffi Carefin Centre for Applied Research on International Markets, Banking, Finance and Regulation since 2015. He conducted many research, training and consulting projects with some international organizations(International Monetary Fund, World Bank, Inter-American Development Bank, United Nations).  Read more

Secretary General of the Pesenti Foundation, Senior Advisor for Italmobiliare’s Communications and International Affairs, and President of Federbeton (Italian Association of Cement Producers). Graduated in Communication Sciences, he is a professional journalist and professor of Communication Strategies at the second-level Master in Media Relations, Cattolica University of Milan. Read more