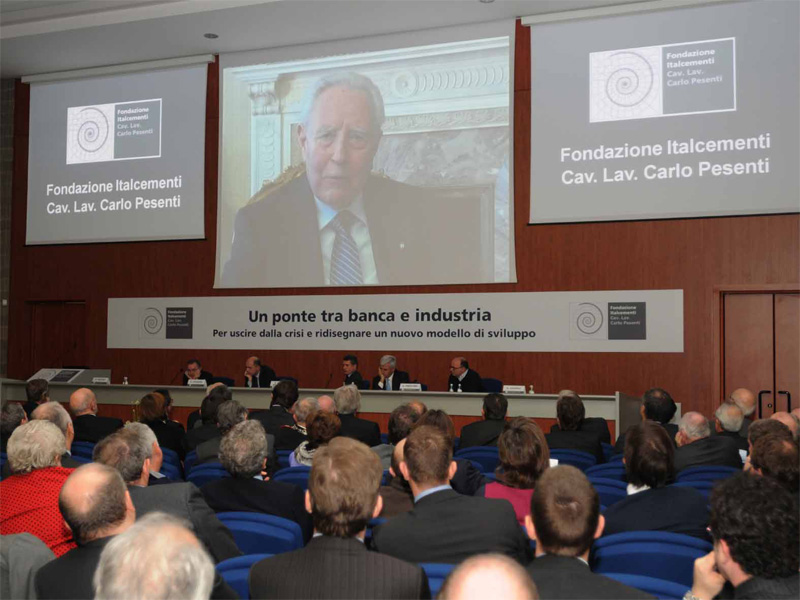 A strategic rethinking of the relationship between finance and industry after the recent economic and financial collapse generated by the systemic crisis is a concrete way to support the exit strategy and build prospects for a recovery in the real economy.
All without losing sight of the ethical principles and core values of sustainability that characterize correct economic growth.

Bergamo, December 12, 2009 – “Creating a bridge between banks and industry to look beyond the crisis at new models for sustainable economic growth”. This was the message to emerge from the sixth congress of the Cav. Lav. Carlo Pesenti Foundation held in Bergamo. The event has become an important annual occasion for debate on key economic and industrial issues, addressed in previous years by distinguished speakers including Nobel Laureates Joseph Stiglitz and Michael Spence and economists and academics like Alberto Alesina, Taotao Chen, Domenico Siniscalco and Tito Boeri.

After a welcome from the Foundation President, Giovanni Giavazzi, the congress took its cue from an analysis of the initial signs of an “after crisis” scenario presented by Mario Deaglio to bring leading names from the financial community and Italian industry face to face.

A new “bridge” for the country’s growth On one side, Intesa Sanpaolo CEO Corrado Passera and Unicredit CEO Alessandro Profumo, on the other Luxottica MD Andrea Guerra and Giorgio Squinzi, head of Mapei and president of Federchimica, discussed the motion proposed by Giorgio Barba Navaretti, chair of Political Economics at Milan University and moderator of the debate, that the country’s growth requires a new “bridge” and new rules.

Although signs of an improvement in the economic situation are beginning to emerge, the continuing weakness of demand and the related long-term implications, such as rising unemployment and falling investment, represent a formidable challenge for banks and the corporate sector creating the need for a review not only of market rules and checks, but also of the constraints and goals that underpin operating relations between the two sectors. The question of rules and supervision of market mechanisms, a subject recently examined by the EU, and, specifically, the need for a common scale of values was examined in a powerful address by Carlo Azeglio Ciampi, President Emeritus of the Republic of Italy. “Over the past twenty years the dimension of global finance gradually dilated to the point of complete detachment from the needs of the real economy. The paradigm was overturned as finance shifted from the role of ancilla to the role of dominus,” Ciampi said in his video message to the participants at the Fondazione congress. “The bodies responsible for drawing up new rules for the financial sector are hard at work, despite the difficulties of reconciling sometimes conflicting interests.

We are confident their results will not be long in coming. Nevertheless,” Ciampi added, “strict rules and coordinated supervision will have little or no effect unless we embrace and accept the idea that a radical change of key is necessary in our approach to finance and the economy, at individual and collective level; and, most important of all, unless we review the underlying scale of values.”

Thanking the guests at the close of the proceedings, Italcementi chairman Giampiero Pesenti stressed the need for a continuous moral as well entrepreneurial commitment to make the most of trends that can drive scenarios for positive change, even in difficult conditions like the present: “Times of serious crisis also offer great opportunities.”