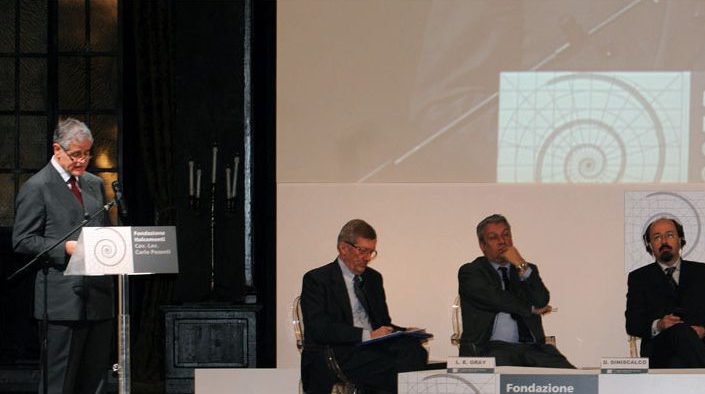 “A radical change is needed to react to the crisis”.

The annual conference crowded the Gaetano Donizetti Theater to reflect on Obama’s America.


Bergamo, 13 December 2008 – America that looks to the future and questions itself – together with the rest of the world – about the road to take to get out of the global financial and economic crisis.
This was the message of the conference Obama’s America: back to the future, organized by Fondazione Cav. Lav. Carlo Pesenti, that was held this morning at the Donizetti Theater in Bergamo.

Alberto Alesina, Professor of Economics at Harvard University, Domenico Siniscalco, Managing Director of Morgan Stanley International, Bill Emmott, writer and former Editor-in-Chief of The Economist, and Lawrence E. Gray, Professor at John Cabot University took part in the debate introduced by Roberto Formigoni, President of the Lombardy Region. The conclusions were presented by the winner of the Nobel Prize in Economic Sciences Michael Spence.

Roberto Formigoni, who introduced the discussions, pointed out that «the global financial and economic crisis we find ourselves in is proof of the interdependence that characterizes the modern world. But if interdependence is the road that has brought us to the crisis, it is also the road to get us out of it, which, howevercannot be taken without an authoritative political action by the United States». Alberto Alesina illustrated the characteristics of the American recession, warning against the risk of choosing public actions as a reply to the crisis. «In order to give short term replies, we must act on levers that give immediate effects, declared Domenico Siniscalco, even if we must also identify a policy to find the way out of the tunnel with a common vision».

Bill Emmott mentioned the particular situation of Europe: “Our Continent is characterized by excessive internal subdivision which must be overcome if we are to achieve a true political leadership”.

Moreover, as emphasized by Lawrence Gray , “especially in Europe we must overcome the idea that the causes of the crisis are all due to America alone”. The Nobel Prize winner Michael Spence spoke about the reduction of poverty and protection of health and employment growth in emerging Countries as the pillars of global economic development. «The political and social aspects of every individual Country, especially of developing nations such as India and China , must be analyzed and rethought, since there is a strong interdependence of the global financial system», stated the economist. «The crisis we are experiencing, emphasized Giampiero Pesenti Chairman of Italcementi, has the flavor of an epochal transformation and the inauguration of the new young President of the United States, in 38 days, is given a very strong symbolic value, especially since, in his first speech after his election, Obama spoke with strength about hope. Hope for America , but I believe also for the rest of the world». «Just as America is preparing itself to follow a new path – Pesenti continued -, Europe and Italy must also find, and they certainly will do so, the strength and will to struggle and tackle the crisis with determination, to put the difficult days behind them and to regain momentum». At the beginning of the conference, the Chairman of Fondazione Cav. Lav. Carlo Pesenti, Giovanni Giavazzi, took the floor to say that «The ambition of this initiative is to root complexity in the territory. To get used to looking far ahead, so that we can get a better understanding of what surrounds us».